Roll over image to zoom in

This PA system packs 50 watts of power into a unit weighing less than six pounds, reaching an audience size of 300 people with crystal clear sound. The wireless microphone has a range that allows the presenter to stand up to 100 feet away from the PA system while speaking. Built-in single channel VHF receiver in the unit allows for only one wireless microphone to be used at a time. An optional wired microphone can be plugged into the Power Pod PA to allow for dual presenters, with one presenter speaking from the wired microphone and the second presenter speaking from the wireless microphone. Loaded with a media player that gives you the ability to play recorded audio from a SD card or a USB thumb drive and includes FM radio with remote control. You can even record a presenter’s speech that is spoken into the microphone onto the thumb drive. The media player and FM radio is accessible by either using the control panel on the unit or the remote control. The unit runs up to eight hours off its internal rechargeable battery. A full set of controls include wired mic input with wired microphone volume, wireless microphone volume, wireless antenna, echo effect, auxiliary volume, tone control, MP3/FM volume and recharging connect. Number of Mic Inputs: 1; Speaker Type: 6.5" Full Range Speaker; Number of Speakers: 1; Additional Features: 120 V ac Power Cord; Bluetooth Plug-In Receiver; FM Radio; Headset Microphone; Lapel Microphone; Media Player with USB/SD Inputs with Recording Capabilities; Remote Control; Wall Charger with USB Connection and 3.5 mm Charging Cable; Wireless Handheld Microphone.

Warranty parts issues can be handled by contacting our customer service department at 877-449-0447. Unless authorized, all parts sales are final. Stock My Closet has the right to refuse returns on any item for any reason. Some items are strictly non-returnable without exception (e.g. batteries, Diamabrush, specially sealed electronic parts, any part delivered outside of the United States, items shipped to freight forwarders).

Over 30 distribution centers across the United States.

Your payment information will never be stored in our system.

I received the product. All 12 cans were present, with a few with cracked tops. All-in-all, they will get the job done.

This is my second purchase from Stock My Closet. I am so happy to be able to get my hands on this Lysol spray especially since you can’t find it anywhere. My order was shipped quickly. The package was shipped with bubble wrap to prevent the caps from busting. All the bottle caps arrived in perfect condition without any breaks or cracks. I appreciate that! Thank you!!! 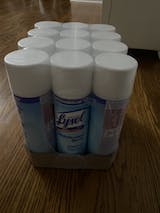 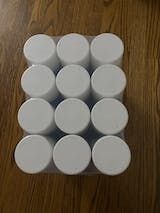 My order was shipped in a timely manner but the tops on 3 cans were damaged (Busted). It would be great if they were replaced.